Al Maurer of Reclaim the Blue is the newest member of the Rocky Mountain Alliance of Blogs. From Al's bio:

I am a former military officer and assistant professor of political science. I am also a geek. Technology is my business, politics and history my passion. I write this blog as I have time. I’m one of the 40% of Americans who support the rest by paying taxes.

Welcome aboard!
Posted by Ben DeGrow at 8:36 PM No comments:

Quick updates...
We welcome two new Colorado blogs to the Rocky Mountain Alliance and invite you to check them out and add them to your regular blog reading (if you haven't already):Also, Steve Nielson's The Liberty Republican (fka The New Conservative), having relocated to Washington State, has resigned from the RMA. Though in a different part of the country he still has interesting things to say, so feel free to keep him on your blogroll.
Posted by Ben DeGrow at 6:48 AM No comments:

Getting Connected in Colorado

The Rocky Mountain Alliance's own Randy Ketner (aka Night Twister) has created an invaluable resource for conservative activists in our state: Check out "Getting Connected in Colorado".
Posted by Ben DeGrow at 8:52 PM 1 comment:

The Rocky Mountain Alliance of Blogs hosts a weekly Blog Talk Radio program. Tune in Tuesdays at 8:30 PM local Mountain Time. You will find a complete listing of past episodes below.

Guests regularly join us to share in some lighthearted and penetrating discussion of the week's events in national and Colorado politics from a right-of-center perspective. You are welcome to join in the conversation.

Click the icon to listen to our latest episode and to find links to previous editions:

June 2: (Episode 29) The hosts discuss major Colorado political races, tough decisions for Governor Ritter, the General Motors takeover, President Obama's trip to the Middle East, and the NRSC's meddling in the Florida Senate primary. Colorado Republican U.S. Senate candidate Cleve Tidwell talks about some of the issues in his campaign, including the online astroturfing controversy that reached the Denver Post this week.

May 12: (Episode 26) Republican Weld County District Attorney Ken Buck makes the case for his U.S. Senate candidacy and takes on issues both foreign and domestic. Scott Gessler, the GOP's first candidate for Secretary of State, explains his qualifications and his plans to clean up Colorado elections.

May 5: (Episode 25) Blogger extraordinaire Ken Marrero (the Blue Collar Muse) talks about his extensive involvement in the national Tea Party movement, the emerging American Liberty Alliance (of which he will be the new executive director), and a little of his home-state Tennessee politics.

April 28: (Episode 24) Colorado's first announced Republican candidate for state treasurer Walker Stapleton highlights his qualifications for taking on Cary Kennedy, while dissecting the challenges of public pension reform and other fiscal issues at the state level.

March 31: (Episode 20) Arapahoe County clerk Nancy Doty talks about a potential run for Secretary of State. University of Denver law professor Robert Hardaway brings his expertise to bear on HB1299, the bill to replace the Electoral College with a National Popular Vote.

March 24: (Episode 19) The hosts review the results of the recent state GOP organizational meeting. Boulder County GOP chair Scott Starin weighs in with his ideas about the future direction of the Party. David K. Williams explains the work of his newly co-founded Gadsden Society of Colorado.

March 10: (Episode 17) Colorado Republican Party Chair Dick Wadhams looks at the party's past and future fortunes. Iranian-born political freedom advocate Hassan Daioleslam explains what the Iranian mullahs' lobby is up to in the United States.

February 24: (Episode 15) Evan Coyne Maloney elaborates on his film Indoctrinate U, shown at the inaugural Liberty on Film. Nadeem Esmail of the Fraser Institute discusses the dangers of single-payer (socialized) medicine from firsthand experience.

Two special editions of RMA Radio: The Pork Roast/anti-stimulus rally edition from the steps of the State Capitol (February 17) and extensive coverage of the Larimer County Lincoln Day dinner (February 21).

February 17: (Episode 14) Denver-based political activist Chris Maj explains why he got active in Ron Paul’s Campaign for Liberty. The hosts reflect on the day's Pork Roast/anti-stimulus rally at the State Capitol.

December 30: (Episode 7) Members of the Rocky Mountain Alliance reunite to take a look back at a dismal year in our 2008 year-in-review episode.

December 16: (Episode 5) State Representative Kevin Lundberg, R-Berthoud, talks about key proposals he plans to introduce in the upcoming legislative session. The hosts discuss the Ken Salazar appointment as Obama's Secretary of the Interior.

December 9: (Episode 4) Aurora City Councilman and rising Republican star Ryan Frazier talks about his vision of liberty, his support of right-to-work in the recent campaign, and plans for his own political future.

Posted by Ben DeGrow at 9:00 AM No comments:

The Rocky Mountain Alliance is Back 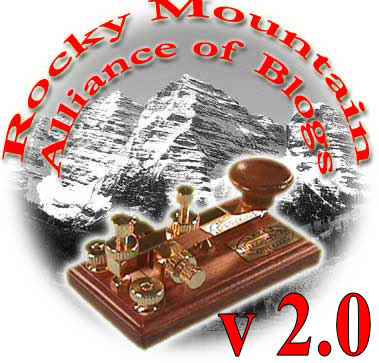 In 2004, the Rocky Mountain Alliance of Blogs was formed - a loose collection of Colorado conservative bloggers who combined forces to grow new media influence in our state.

Times change. New blogs come. Old ones go. 2008 brings the birth of the Rocky Mountain Alliance, version 2.0. To the right you will find not only links to each of our sites but also a feed you can scroll through to see our latest posts.

Some of the original cast remain, strengthened by the fresh blood of some high-quality newcomers. The goal of the Rocky Mountain Alliance 2.0 is to promote our shared conservative vision of limited and accountable government, freedom, and personal responsibility - in Colorado and in our nation, the result of the most brilliant and noble political experiment in human history.

You are invited to visit each of our sites and leave your comments.
Posted by Ben DeGrow at 2:52 PM 2 comments: